A version of Lifestyles of the Rich and Famous but with more swagger, MTV Cribs has taken us through the homes of those with more money than sense.

Like the Sun King prancing us through Versailles, Mariah Carey has shown us the “full blown salon” in her house as well as “the extended version” of her closet with its “gold leaf designs on the floor” where she briefed us on “the basics of [her] shoe room”. Emotionally uninflected until he discussed his car collection, The Game introduced us lovingly to his Bentley, Dodge Charger, and sassy lemon lime Lamborghini. And Bret Michaels graciously led us through his living room on a Harley Davidson, past his leather sofa that seats a thousand, and into his kitchen where he urgently displayed the contents of his fridge while a stripper made him a PB&J sandwich (crusts cut off because Michaels is a business man).

So, understandably, there were high hopes for the 2001 episode featuring Redman  at the height of his powers– the MC, producer, actor, two-time Grammy nominee, member of the Def Squad and collaborator with Method Man. But – as we stepped over his sleeping cousin, watched Red iron a sweatshirt on the floor of his two bedroom Staten Island home and looked at his totally normal bathroom– we slowly realized who was being played, felt thoroughly ashamed of ourselves, turned off the TV and did something useful with our time. MTV doesn’t do irony, but Redman used it as a medium to remind us that the goodness comes from keeping it real. 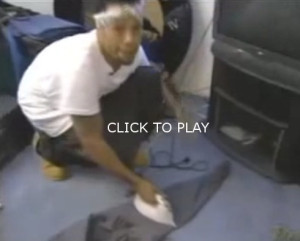